Dark clouds covered the sky and thunder noises resonated in the sky as lightning flashes.

It felt like lightning was ready to destroy and break the sky into pieces.

"Bullshit!" Steve looked at the sky as he sighed; he knew that the weather will be bad. He was hitting the road way to the nearest store.

If PizzaBuddy in the dorm area wasn't in renovation, if he didn't loss three consecutive games in poker, he won't be here in his shorts and slippers. He was resting on his bed but his friends asked him to play poker with them.

Boom! A loud thunder noise sounded, and Steve started to run as he don't want to be hit by this storm.

"Get out of my way...!" As Steve was about to speed up, he saw a girl flying towards him. He hadn't have much time to escape so they both hit each other.

He was confused. He was shocked by what he saw. The girl was flying.

"Damn..." Steve stand up and pointed his fingers. "Who are you?" Steve shouted.

However, the girl didn't pay attention to Steve. She saw that her crystal scrypt is already at the chest of Steve.

"Give me back my scrypt!" The girl shouted.

"Hey, you just hit me..." Before Steve could finish, a very deep voice resonated in the sky.

"You can't hide from me!" The girl kissed Steve and said random words then she ran off.

Steve then rubbed his lips. He couldn't remember the warm feeling of kissing that he had heard about.

After two seconds, Steve just realized that his world was just like in the Anime World but the place he used to live in is still the same. It just turned more interesting.

Steve looked up at the sky. "Damn this weather; I thought it is going to rain." Steve murmured to himself.

While taking into consideration what just happened, Steve got onto the nearest pizza store. After that, he promptly returned to his dorm that was located at the north end of the campus.

"What took you so long? Quick, we are all hungry!" After seeing Steve, his three roommates shouted.

Steve saw that his roommates were normal, he then though that the surroundings only did change.

He gave the pizza to them and said, "You guys can eat, I am full."

"What is up? You were hungry a while ago right?" Kobie, who was wearing a white t-shirt asked, "Didn't we agree that whoever lost would go and buy pizza for everybody?" He was the self-named dorm captain.

"I'm just a little dizzy..." Steve said as he crawled up to the upper berth that belonged to him.

"Hey, we agreed eating this together!" Kobie wasn't too happy.

"Are you ok?" Christian, another roommate, asked as he was worried about Steve.

"Not sure, I'm just not feeling too well." Steve rubbed his chest as he responded. "I feel that something is in my chest, is this the scrypt that the girl was asking for? But I can't see it." He thought.

"Should... we take you to the infirmary?" Kobie also got serious as he saw Steve's facial expression.

"It's fine. I fell by accident on my way to the pizza store." Steve pointed at his elbows that swelled a little.

"Then get some rest. Since it is not going to rain, we are going to the internet cafe." Airon, the third roommate, said.

"Yeah, I think I need rest. You guys go ahead." Steve waved at them. He wasn't in the spirit.

Kobie was still worried. "Just call me if you need anything," he said.

"Ok" , Steve took off his slippers and got in his comfortable, cozy little bed.

Before Steve took a rest, he was thinking about the girl. "Why is she flying? What is the scrypt the she's talking about? Who is that man with a scary voice that made her run?" He pondered.

Hey guys, thank you for reading this. I am planning to write a novel with a title CryptoMan. The story is quite already fixed and will discuss heroic scenes. More cryptoheroic revelations are coming.

Why did the girl kissed Steve? What is this scrypt? What will happen to Steve? Who is the man that scared the girl?

Do you want to know it? Stay tuned for the chapter 2.

Sponsors of sjbuendia
empty
Become a sponsor
Get sponsored
1 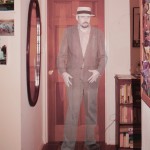 Written by sjbuendia   73
Helping my peers learn and adopt Bitcoin Cash.
5 months ago
Topics: Fiction, Film
Enjoyed this article?  Earn Bitcoin Cash by sharing it! Explain
...and you will also help the author collect more tips.

Making Espressway Accept Bitcoin Cash
CryptoMan on it's Chapter 3
What if...?
About us Rules What is Bitcoin Cash? Roadmap Affiliate program Get sponsored Self-host
hello@read.cash (PGP key) Reddit