Adventure tour in Europe: The Castles of Bellinzona

Catching the first bus of the day and going to the old village of Monte Bre atop the mountain, I headed back to town and grabbed my free train (thanks to the Ticino ticket) and headed for my 45 minute train ride North to the town of Bellinzona!

Now, on my way to Lugano I passed through Bellinzona on the train, and recall seeing the castle all lit up at night as we passed by, so I was already imagining what would await me when I arrived. I boarded my train, showed the conductor my Ticino ticket and was on my way!

After about 45 minutes, it was my stop. I hoped off the train into a smallish train station and seek to make my way outside. I find the exit onto this small alleyway of a road, lined with trees all the way down.

I checked my maps, and headed towards what seemed like the city center. Anticipation ever building of what my first glimpse of these castles will be. And it wasn't long, as I'm walking down this street, I glance over and there's a piece!

I head down this alley way to see where it goes and approach the castle walls. It's massive.

I follow the path further and into a cavern under the castle. There's an elevator. I get in and see where it leads. It opens, and here I am looking at this huge pathway into the castle.

I get to the top of the path and turn into the main grounds of the castle and look out over the walls to my right and was bewildered with this amazing view.

I also noticed there were stairs going up the wall. I didn't see anyone up there and figured it was off limits to the public, but figured I could get at least one or two shots before security spoke to me.

Turns out apparently the walls that sprawl out through the city were fair game! This is Castle Grande.

It may be hard to tell from the photos so far, but Castle Grande is actually located on top of this huge rock in the middle of town. Here's looking out from one of the outcrops of the rock.

I decided to keep exploring the perimeter of the castle before going back inside. As I was walking along the walls, I spotted the 3rd castle, way up in the mountains, partially obscured by the fog.

That's it. I need a birds eye view of this town, time to climb the towers.

I make my way up the tower walls. I begin to climb and not too long after reach the top of the tower. There's a few young kids up here, I don't pay them much attention and begin photographing. As I go to change my lens I notice what they're doing. They're flying paper airplanes out of the castle tower to see whose goes furthest. All I could think of was here are these kids, growing up flying paper airplanes out of castle towers, how amazing is that? How amazing are all these lives I'll never get to live? I then pull my drone out of my backpack and gesture as though I would throw it off to compete with them, although we didn't speak the same tongue, they understood and laughed, and no sooner they were gone, running down the stair well to go retrieve their paper airplanes. I went back to photographing.

That was enough, I have limited time here and 2 more castles to visit. Time to head back down. I catch this view of one of the other castles as I head down through one of the slot windows in the stairwell.

I head out of the castle walls once again and begin to descend down into the city.

I walk the streets of the city a little bit as I head towards the next castle. I duck down a small alley way next to an old church which leads to a small path that ascends up the mountain. I begin to climb. Not long after I come to an opening and get an amazing view of where I just was, Castle Grande.

I begin to climb a bit more to the front of the next castle, Castle Montebello.

Alas, due to the thick fog, I wasn't able to get many photos of this castle, but I had the sense of accomplishment of making the trek to it. But it slowly faded as I remembered how wet and cold and tired I was. It was time to head back to town and catch my train. I began to hike back down the steep streets towards town, the water running through my shoes; and the stars through my soul. 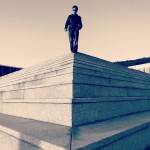