Supposedly, I'm gonna post this earlier but then something came up so I've posted it a bit late.

So what I'm gonna show you today is how I made a fanart of my husbando (kidding😂), I mean fan art of one of the protagonist of the anime "Attack on Titan", Levi Ackerman.

Levi Ackerman (often incorrectly romanized as Rivaille) is one of the main protagonists of the anime/manga series Attack on Titan. He is a Captain in the Survey Corps, known to be the strongest soldier alive. He has a harsh and unsocial personality, but is well-regarded by his subordinates and he cares about their lives.

This fanart is requested by @kli4d . Hope you like this one bruhhh😉💕.

So this is the final output💕.

So here it is:

So for those who requested a fanart of their favorite anime character, I am still working on it but then I still have a lot of WIPs. But probably be posting one fan art per day so stay tuned!💕 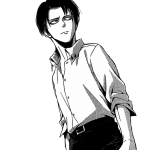 Sponsors of OverThinker
empty
Become a sponsor
Get sponsored

Written by
OverThinker
OverThinker
222
Let’s make freedom through writing!
1 month ago
In community: Anime recommendation and review.(df89)
Enjoyed this article?  Earn Bitcoin Cash by sharing it! Explain
...and you will also help the author collect more tips.