Full description of the deep web

The internet that we use everyday like checking emails, exploring articles, chatting, etc. turns out to have a web level that we can explore until it's difficult or even impossible to explore.

What is ingrained in our minds is that the contents of the Deep Web are illegal and terrible things, such as buying and selling drugs or human trafficking. Actually, without exploring the Deep Web, there are already many sites that contain these bad things. With the mysteries of the Deep Web, everything turns into some horrible and well-known illegal sites like Red Room or Snuff Films.

In early 2012, an infographic about the Deep Web began to take shape when Tor and Silk Road reached the peak of popularity. When searching the Deep Web site begins to be united with the Dark Web. In this infographic structure, the deeper, the more absurd it is.

The following is a Remote Web-level infographic. Here infographics are represented by icebergs from the surface to the depths of the ocean. Explain the level of the web starting from an easily accessible surface, to a certain depth that is increasingly difficult to explore.

Level 0 - Common Web, On the surface of the iceberg, there is the Common Web. The Common Web is the level where we usually browse every day, such as: YouTube, Facebook, Google, Twitter, and other sites that we can easily explore. Basically everything is on the Public Web.

Level 1 - Surface Web, Further down, there is the Surface Web. Sites at this level are still normally accessible, but are rather difficult to find, and the content is deeper than the Common Web.

Level 2 - Bergie, Websites at this level are the last to be accessed normally. At this level, we can find a number of "underground" ones, but they still include registered sites. Next we need a proxy to be able to move up to the next level.

Level 3 - Deep Web, We start at the level widely known as the Deep Web. Since 2001, the Deep Web has been declared to have a size larger than the ordinary Web. This level contains hacker sites, CP or Child Pornography, and sadistic or sadistic things that are full of violence. Next we need Tor to be able to move up to the next level. Onion or Tor Routers are servers that make anonymous users on the internet. Tor Browser maintains the confidentiality of your search activities. This masks your identity and protects your web traffic from various forms of Internet surveillance. Tor can likewise be utilized to sidestep Internet sifting. On a deeper level from the Deep Web, we can find celebrity scandals on The Fappening run by hackers.

Level 4 - Charter Web, This level contains content such as buying and selling drugs and human trafficking, illegal films and books, the black market, and child pornography. Furthermore, to be able to move up to the next level, we need a hardware modification, called "Closed Shell System". At a deeper level in the Web Charter, filled with hardcore CP, hardware experimentation information, as well as more sinister information, such as the experiment of the second world war, and even the location of Atlantis. If we dive deeper, there are 80% of the internet at this level. To be able to enter this level, Quantum Computing is needed. In theory, quantum computers are much faster than ordinary computers. And with that ability, someone can make a breakthrough where things that were previously impossible to solve, become easy and fast. In this case, the authorities or the FBI have Quantum Computing to oversee this level. Decreasing Falcighol Polymers is needed after this point. Falcighol Polymer derivation is a very complex quantum calculation algorithm. We can only access this level using Falcighol Polymer Derivation, which requires using a quantum computer.

Level 5 - Mariana Web, How lucky if anyone can reach this level, because it seems impossible to achieve it. Taken from the name of the deepest trough in the world Mariana Trench in the Pacific Ocean. It may contain government confidential documents. It was reported that the Mariana Web is a myth because there is no evidence to suggest the existence of this web.

Level 6 This level is the intermediate level between the Mariana Web, Level 7 and 8.

Level 7 - Fog / Virus Soup, This level is like a battlefield. Hackers or anyone who competes to reach level 8. They try to stop each other from reaching level 8, in any way. This level is called The Fog or Virus Soup because it contains a lot of code or viruses that will damage and get rid of anyone who tries to get past this level.

Level 8 - Primarch System, This is the last level on the web. This level is very impossible to be accessed directly. Literally The Primarch System is something that controls the internet. There is no government or certain body that can control it. Nobody knows what a Primarch System is. This is an anomaly that was discovered by a deep web scan conducted in the early 2000s. This system is not responsive, or will not respond to anything, but carries out commands throughout the network at random. The Primarch System is also known as the "Last Boss of the Internet".

That's the deep web level. Many doubt the truth, many consider it a myth. Why do many people still believe it? Because content on the Deep Web attracts a person's curiosity, so that makes people believe what is in it. For example, such as the myth of the location of Atlantis. There is no strong evidence about the existence of Atlantis, but the content about Atlantis makes people want to believe it because someone's curiosity is great. You could say that content on the Web Away sells one's curiosity for the benefit of content creators. What do you think?

Be careful when trying to access the Deep Web. Because the inside is full of terrible content that is very disturbing, and there is a possibility the device or computer that you use can be tracked by hackers out there. Thank you for reading. 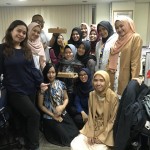 The German patriotic ended with Tragic, a scientist named Fritz Haber
About Hikikomori
A Little Story about the City of Pompeii, City of Passion.